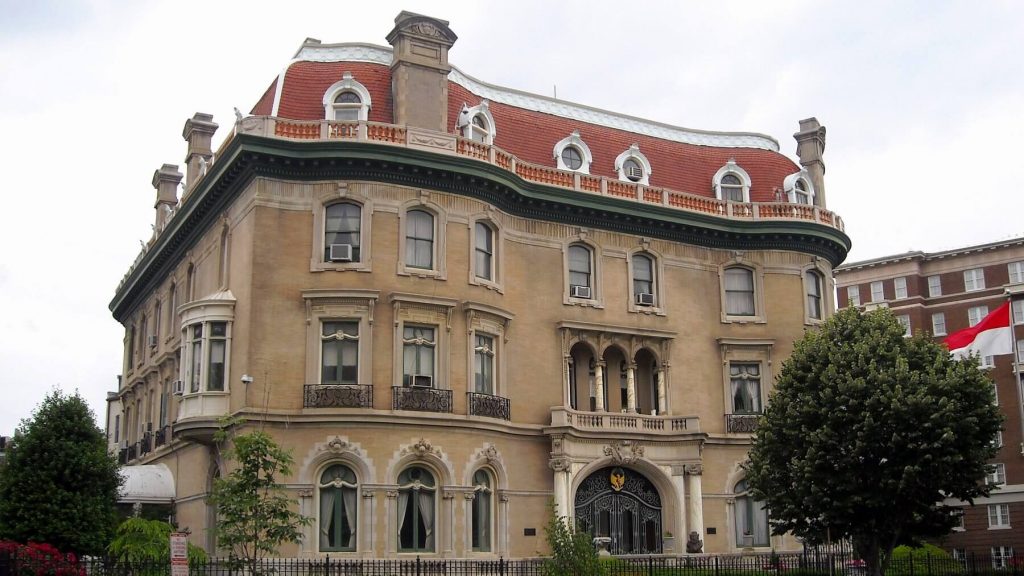 There are almost 180 embassies located in our nation’s capital, but one particular section of Massachusetts Ave became popular real estate for various countries diplomatic locations. Have you ever you wondered how this stretch came to be known as Embassy Row? Originally known as Millionaire’s Row, the Great Depression caused many wealthy homeowners to abandon their homes in this area and offer them up for sale. Though not many people were in the market for a mansion during this bleak time, these homes became perfect diplomatic offices for any willing country.

Two examples of mansions that have become Embassies

The current Indonesian embassy was the former residence of Evelyn Walsh and Ned McLean, the last private owners of the Hope Diamond.

The Turkish Ambassador’s residence was owned by Edward Hamlin Everett, who owned a very successful bottling company. Munir Ertegun, the Ambassador of Turkey, moved in 1934 with his teenage sons. They became huge fans of the emerging jazz scene in DC and invited musicians to play concerts in their lavish mansion. DC was strongly segregated at this time, and it helped create a huge bridge between two differing communities. The two teens, Ahmet and Nesuhi Ertegun, went on to form a pretty successful record label named Atlantic records. Greats like, hometown hero Duke Ellington, John Coltrane, and Ray Charles were launched due the work of these two teens.

Embassy Row: an example of some “new” construction

The British embassy was the first constructed embassy on Massachusetts Ave instead of taking over a former house. The Beatles in 1964 had an invitation to a dinner party here when they were playing their first concert in America in DC. They thought they were attending a stuffy dinner party, but it turned into full chaos as the usual reserved diplomats rushed forward to try and meet them to get autographs. One female guest even snipped a lock of poor Ringo’s hair!

These are only a few of the storied embassies in Washington, DC. Come tour with us to learn more about this fascinating neighborhood on one of our Washington “Hidden Gems” tours.

Send us details for your tour. Be sure to include dates, times, number of participants and your tour interests. We’ll contact you as soon as possible.